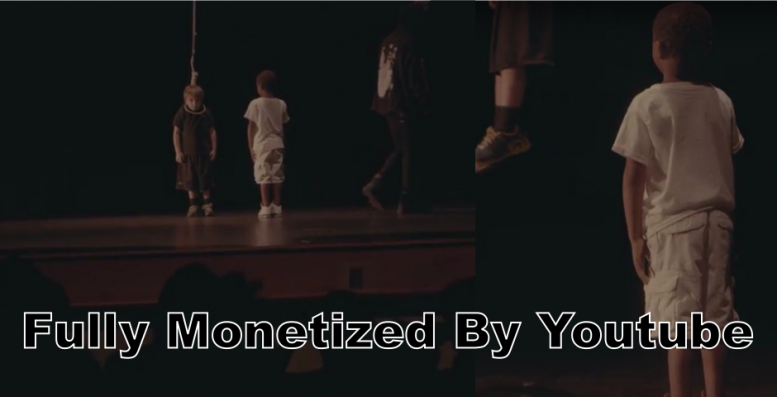 Youtube has recently rolled out several new forms of censorship. Videos with conservative messages are being demonetized, placed into a special “sandbox” status where no one can find them, or banned outright. Youtube uses audio matching technology to prevent banned videos from being re-uploaded by other people.

Youtube is accelerating this censorship on a daily basis. Now, virtually everything right of center is being, at the least, demonetized. Even some moderate political commentators are now being demonetized.

What is not censored is actual incitement of racially motivated violence against white people.

Gangster rapper XXXTentacion has a new video with graphic and disturbing depictions of violence against white people. This includes a depiction of the rapper teaching a little black kid how to murder a little white kid. The little white kid is then depicted being hung to death.

The video has been viewed almost five million times. It is being praised by black supremacists.

The video is fully “monetized” by Youtube. This means that Youtube is sharing the ad revenue it generates with the publisher. In other words, youtube is financially supporting this video.

Youtube does not even flag the video as inappropriate for minors! Meanwhile, Youtube is censoring little known white rock bands for being too nationalistic.

Many people are fighting back against Google and Youtube by installing adblocking browser extensions or using the Brave Browser with built in adblocking. Over 85% of Google’s revenue comes from selling ads. Currently, Google is in a race against time to develop new streams of revenue before the proliferation of adblocking can bring the company down.