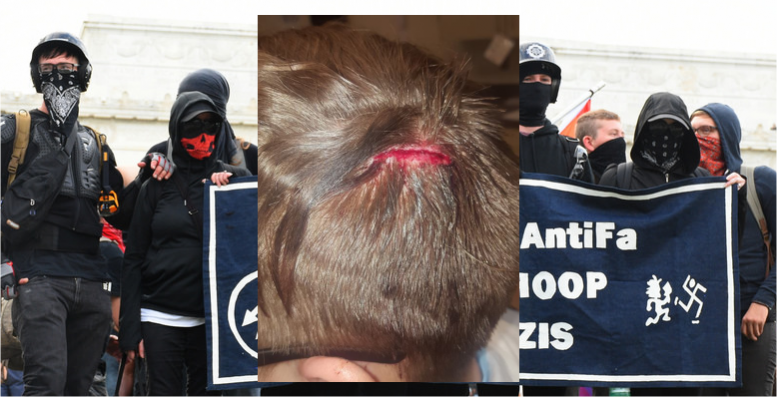 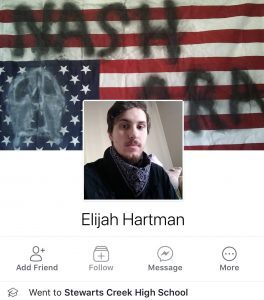 Nashville ARA member Elijah Hartman has been charged with rape.

Update: Thanks to online attacks between rival Antifa, we have learned that a member of Nashville ARA was charged with rape last January.

Recently, scores of Antifa attacked people attending an event at Michigan State University. Eventually, police intervened and arrested twenty-four Antifa. The Antifa perps were arraigned and released on bail over the course of the next three days. Twelve were charged with misdemeanors and four with felonies. Another four are said to be under investigation for felonies, but not formally charged yet.

According to Antifa sources, over $25k was spent on bail money. Lacy MacAuley, a major leader of the Antifa movement, was charged with a felony. It appears that two of her travel companions from the DC area were charged with misdemeanors.

It has now been disclosed that a violent mob fight erupted between rival Antifa gangs later that night. Local Antifa affiliated with the Great Lakes Antifa [GLA] say they were ambushed and attacked by members of a visiting gang called Nashville ARA. One member of the GLA gang, described only as “Jewish comrade,” was bashed in the head with a metal police baton.

Great Lakes Antifa says that there have been a string of Antifa on Antifa physical attacks and online doxing going back to early 2017. A member of the Communist IWW was allegedly jumped and beaten up by Nashville ARA last year in Kentucky. They also say that a GLA affiliated Antifa became the subject of a Department of Homeland security investigation after being doxed by rival Antifa.

The GLA have now denounced the largest Antifa website ItsGoingDown, and the Antifa network known as TORCH. They say they will not cooperate with ItsGoingDown or TORCH until they break all ties with Nashville ARA. This has led to fallout across the US Antifa scene, with rival factions posting more incriminating gossip online.

As we left the action, Nashville ARA followed us to the perimeter.  Our comrades tried to de-escalate them, but Nashville ARA pulled out batons, and began beating our comrades.  They hit an African American Anti-fascist with a baton, and also called him a n*gger before they did so.  They also blindsided a Jewish comrade with a baton.  The following is a screen shot of a discussion of liberal organizers who witnessed the event.  Identities have been masked, because this network is known to doxx and harass leftists who stand against them.

Black Antifa talks about being attacked and called a racial slur by the Nashville ARA: