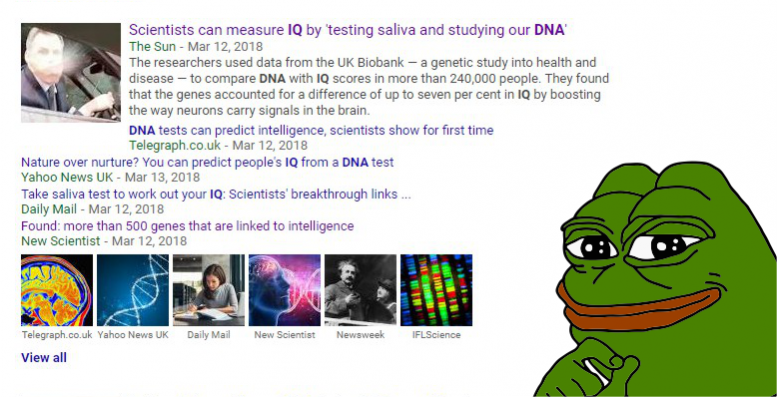 For thousands of years, people have understood that intelligence, athletic ability, and behavior have strong genetic components. This was the entire basis for animal husbandry. This was the justification for hereditary aristocracies. Intelligence was previously demonstrated to be largely hereditary in studies on twins raised apart.

However, Cultural Marxists have tried to deny these basic truths. In 2013, Scientific American actually called for a total ban on the study of human intelligence. They also denounced individual scientists and behavioral genetics in general. In 2014, Scientific American claimed that efforts to link genes to IQ were total folly. People who claimed to be scientists were denouncing actual science in the name of cultural Marxism.

Now, advancements in DNA has brought everything tumbling down.

Researchers at Harvard and the Centre for Cognitive Ageing and Cognitive Epidemiology at Edinburgh University have announced that they can now accurately predict what range a person’s IQ will fall in based on DNA alone.

The UK BioBank has allowed researchers to access and compare DNA samples from nearly a quarter of a million people. Previously, researchers have linked 52 genes to intelligence. Now, 187 regions of the genome and over 500 individual genes have been linked to intelligence.

Researchers believe that in the future, they will be able to develop an IQ test based on genes alone.

Newsweek: HOW TO BE SMART: INTELLIGENCE LINKED TO 500 GENES IN LARGE NEW STUDY

New Scientist – Found: more than 500 genes that are linked to intelligence