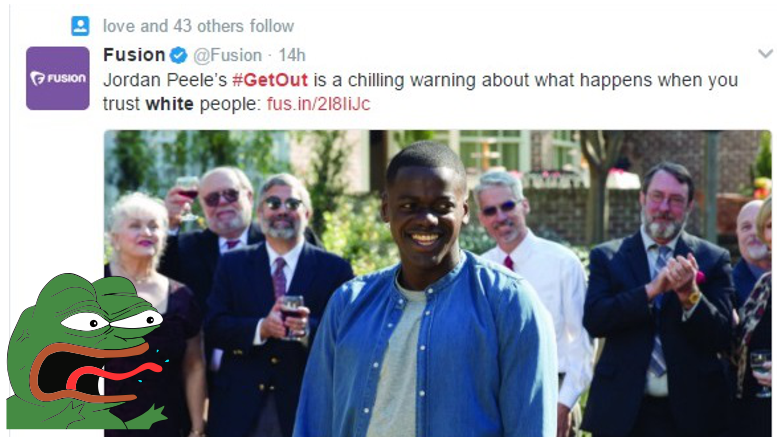 Fusion, a cable tv channel owned by Univision, published a shocking article promoting hatred against white people. The article praises the movie Get Out specifically for its anti-white themes.

Get Out begins to introduce instances of racial anxiety that ring true to the experiences of any black person (read: all of us) who’s ever found themselves isolated in a place with too many white people.

But to read the movie as a simple narrative about race relations is to ignore it’s scathing commentary on the assumption that, in 2017, black people should no longer have to be afraid of white people.

Get Out repeatedly disabuses Chris of any notions of safety in white spaces, while cautioning the audience about believing in the existence of Good White People™. The movie puts forth that not only are black bodies perceived as being inherently dangerous, but should they ever wander outside the social boundaries that have been designed to keep them in check, they’ll be neutralized.

Fusion references a white on black murder that occurred in 1955, but ignores the dozens of black on white murders that have already occurred in 2017.

Meanwhile hundreds, perhaps thousands, of people are praising or glorifying the anti-white themes in the movie on twitter:

#GetOut got me hating white people more than usual

#GetOut was good as hell! The white couple sitting across from me & my family were so uncomfortable. I loved it!

so bro I just saw #GetOut and imma need a restraining order from all white people.

So glad that we watched #GetOut in a theater where there were no white people. But it would have been delicious to witness some white tears

The movie clearly is inspiring racial hatred against white people.