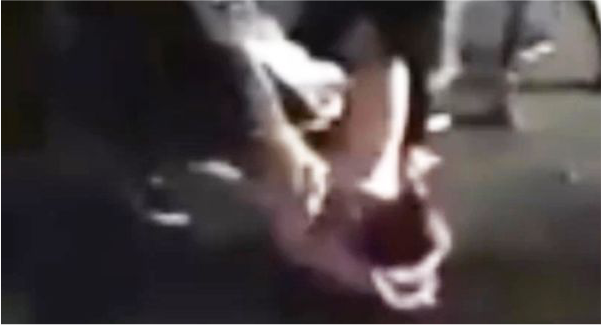 On September 21st, 2016, ten black males attacked a lone white man in a Charlotte parking garage. The victim was targeted was chosen at random based on his skin color. The perps screamed anti-white comments while they drug the man and pummeled him. To add further humiliation, they stripped the victim of his clothes.

Ironically, the white victim was on his way to a #BlackLivesMatter protest when he was attacked.

A cellphone video of the racially motivated attack went viral on the internet, and stunned viewers all over the world.

Two of the perpetrators were arrested and charged with a laundry list of felonies. Now, with no media fan fanfare, the first perp has been quietly let off the hook.

Antonio Gatewood, one of the ringleaders, was charged with numerous felonies. The charges included ethnic intimidation, assault, robbery, and false imprisonment. He was even charged with looting businesses later that day. His is a career criminal who had already been arrested eight times. He was given a plea deal, in which all but one felony would be dropped. He was sentenced to a laughable three months in jail. He was also ordered to pay $3,100 in restitution, which he will probably never pay.

The second person arrested is Cortney Pinkney. He has been arrested five times before. He was charged with assault, robbery, and ethnic intimidation. He has a preliminary court hearing next week. Do not expect him to be punished either.