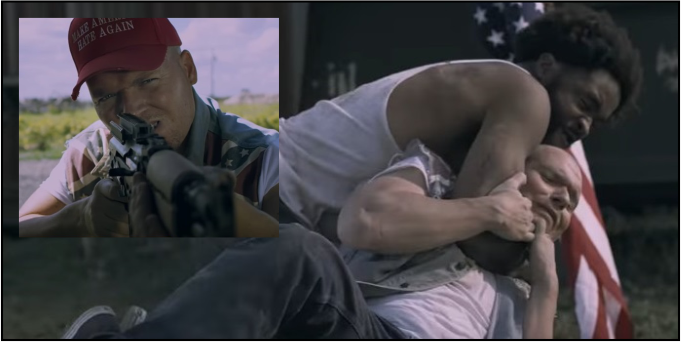 Tunnel Vision, by Kodak Black, is the number eight song on the Billboard 100 this week. It is the number two rap song in America after Bad and Boujee by Migos.

We have seen that pop culture in America seems to be embracing an open hatred of white people. For example, the new movie Get Out is being praised specifically for having anti-white themes.

The video for Tunnel Vision features a white man with Confederate flags and a “Make America Hate Again” baseball cap. The cap is made to look like one of Donald Trump’s signature “Make America Great Again” hats. This image flashes back and forth with a group of black rappers in front of burning crosses.

The white man points a Kalashnikov rifle at a black man, tries to fire, but the gun jams. White on black interracial murders are a very popular narrative in the media and pop culture. However, they are a statistical rarity in real life. The black man, then wrestles his white attacker to the ground in front of an upside down American flag.

The message is clear. White people, especially Trump supporters, are out to get black people.

Recently, major media outlets denounced Netflix for casting a white actor as a martial arts star in the new show Iron First. Finn Jones, the star, got so much flak on twitter that he deleted his account.  The show does feature an Asian woman as the co-star. Why don’t any of these same media outlets ever denounce the blatant incitement of anti-white hatred?

Here are some of the actual lyrics:

I told you niggas, I’m gon’ be that fuckin’ nigga Everything be good ’til you doin’ better than ’em They wanna see a nigga shot or see me in the system All you niggas out here poison like snake venom Codeine in my liver, rockin’ Balenciaga denim I’m booted even when I’m sober, I don’t need a jigga They sendin’ all my niggas on a fuckin’ journey I told that baby to come over ’cause I’m fucking horny My mama told me, “Kill these niggas, son, keep it goin’” I’m thug to the bone, but I’m still her baby boy Lil Kodak, boy they hate to see you in a foreign They miss when you was in that ‘Yota kickin’ door