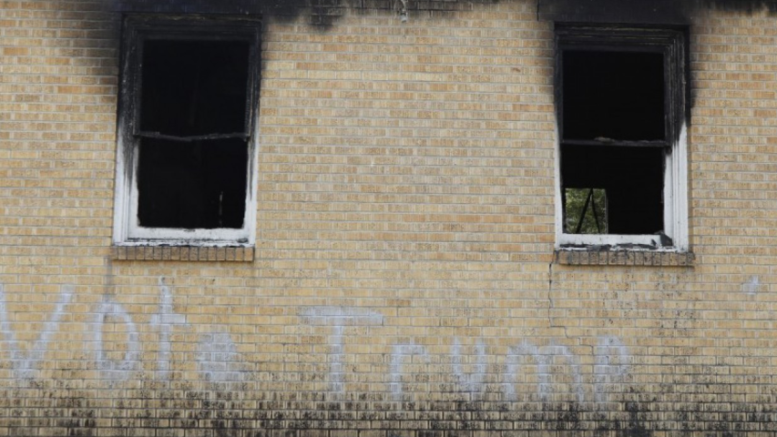 The eight biggest hate crimes hoaxes that the media hyped as being inspired by Donald Trump. Some of these are actually categories with multiple examples.

We were told a white, racist Trump supporter must have torched a historic 111 year old black church in Mississippi. This took place on November 1st. He even spray painted “Trump” on the side so we would know it was a racist attack inspired by Donald Trump. Authorities promised to charge the perp with a hate crime. Then a black male, who was a member of the church, was charged with the arson. He was never charged with a hate crime.

We were told that a Trump supporter must have burned down a mosque in Houston, Texas on Christmas Day. A black male, who is a devout member of the mosque, was arrested.

A white couple claimed their car and motorcycle were set ablaze and “n*gg*r lover” was painted on their garage. It took place last December in Texas. The husband eventually confessed to committing the arson and vandalism.

Last November, a black female claimed three white Trump supporters threw rocks at her while saying racial slurs. Police later determined that she made it up.

Days later, a black male said he was attacked by two white males and called a racial slur at the same college. Police determined that this was also a hoax.

A woman claimed that white men harassed her on the NYC subway, threaten to take her hijab, while invoking Trump’s name. HOAX!

University of Louisiana at Lafayette student says a group of white males attacked her and stole her wallet and hijab. She said one was wearing a Trump hat. HOAX!

On Monday, February 21st, SPLC spokesman Mark Potok went on MSNBC and said there was a massive “uptick” in hate crimes against minorities. He explicitly blamed it on Donald Trump. Then Potok cited the New York City subway claim, which had been deemed a hoax by police over two months earlier. 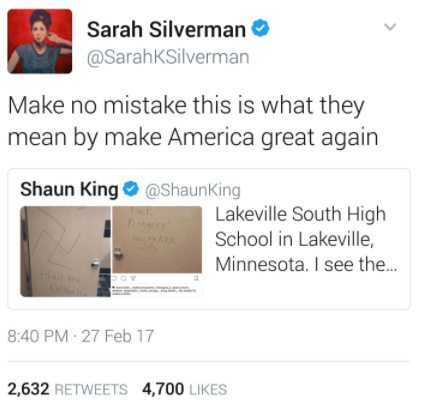 Lakeville South High later stated that it was a hoax perpetrated by a “non-Caucasian student.” None of the celebrities that hyped this hoax, even made any retractions.

The media has blamed Trump for death threats against Jewish Centers for weeks. So far the only person arrested is a black male who is involved with Black Lives Matter and other left-wing causes. He is accused of making bomb threats to eight different Jewish centers.

Death threats against Muslims at University in Montreal

There are many, many others. Click here to see a vast database of hate crime hoaxes across the United States.