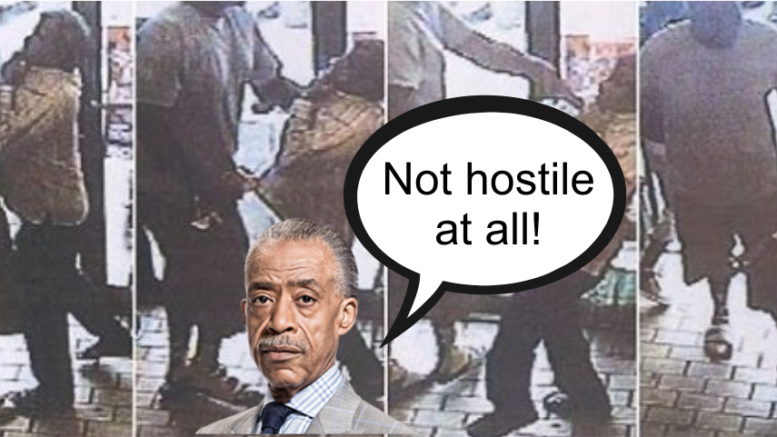 Two and a half years later, major media outlets are still desperately trying to re-assert their false narrative that Mike Brown was a victim of police brutality.

A new video has been released that appears to show Mike Brown handing a bag of marijuana to employees at the convenience store. The same store where he later assaulted the owner and walked off with unpaid merchandise. Most people would see this and say it is more evidence that Brown was engaged in criminal activity. Somehow, the black grievance industry sees the exact opposite.

On MSNBC, Al Sharpton said the new evidence shows Mike Brown’s actions in the convenience store were “not hostile at all.” Sharpton then suggests that the Ferguson police deliberately withheld evidence to ruin Mike Brown’s reputation. He also repeats the old “hands up don’t shoot” lie, which even the DOJ under Obama said was not true.

Meanwhile, Mike Brown’s parent have lawsuits fighting the release of Mike Brown’s medical, academic, and juvenile police records. They are suing the Ferguson police department, but do not want any of those records to be submitted as evidence. It seems like the media should bring this up.

Here is the video of Mike Brown attacking the convenient store owner.

Al Sharpton on MSNBC saying that Mike Brown “was not hostile at all.”

Eventually the media and black grievance industry whipped up such a frenzy that there was a horrific race riot in Ferguson in November 2014. Twenty six buildings were set on fire, including the church that Mike Brown’s own father attended. Numerous stores were looted. Two black on black murders occurred while the rioting was in progress. An elderly white male was carjacked and then hit with his own car. At least three members of the media were attacked and injured.