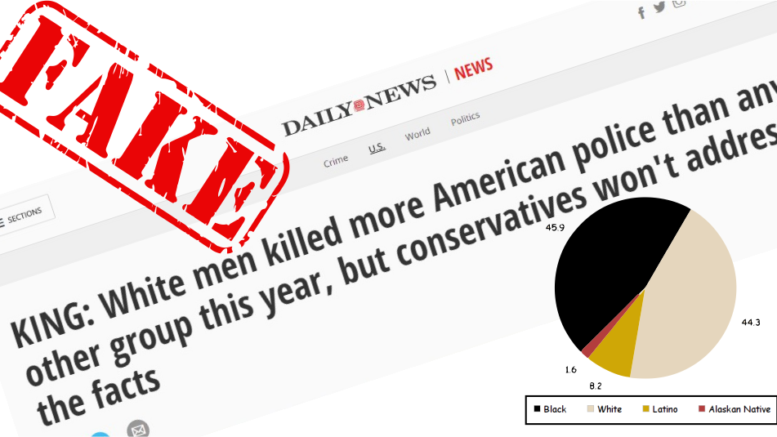 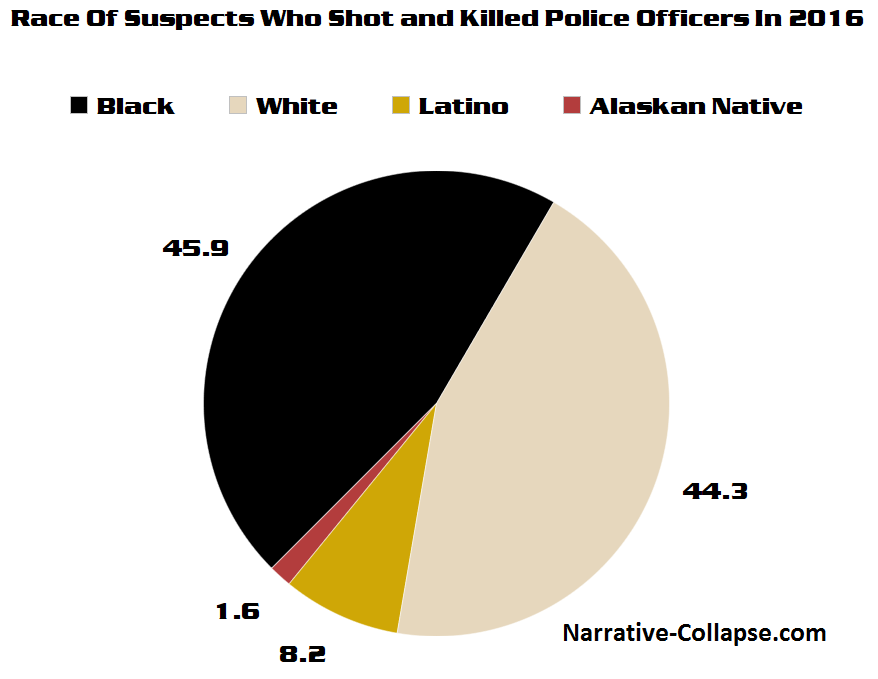 This only includes police officers killed by gunshot in which the race of the suspect is known. It does not include the four corrections officers or anyone else.

In 2016, 62 police officers were shot and killed in the United States. One shooting has no suspect yet. Of the known suspects, 28 are black, 27 are white, 5 are Latinos, and one is an Alaskan Native.

Since black Americans only made up about 12.5% of the US population, they are greatly overrepresented among cop killers in 2016.

This brings us to a notorious fake story published by the New York Daily News last year. The publication claimed that 71% of people killing police officers were white males. They also claimed that there was an ongoing conspiracy to hide this from the public and to falsely portray black men as cop killers. The paper blamed FOX News, Breitbart, Donald Trump, and other “conservative media” for intentionally hiding information about white cop killers from the public.

In order to come up with a figure of 71%. They New York Daily News first started with a tiny, cherry picked data-set where there was an unusually long string of cop killing with white perpetrators. Then they took a very dark complected Latino, with a Spanish name, and turned him into a white guy. Then they demonstrated a stunning lack of mathematical skill. Their own subset contained 29% black killers. This means blacks were still greatly over-represented in their own cherry picked data. Yet the paper simply claimed that their fake white figure of 71% was greater than 29%, therefore white people are more prolific at killing police.

If you expand the data-set used by the New York Daily News, in either direction, the white percentage drops and the black percentage goes up.

This website is currently publishing a running tally of cop killings in 2017. The killing of police officers is down so far, compared to 2016. There have been six, compared to twelve by this time last year. Two have been committed by American Indians and none by white people. You don’t see us screaming that 20% of cop killers are American Indians and 0% are white. If fact, we intentionally state that no solid conclusions can be drawn from the 2017 data yet. That is because we know that the percentages will more or less change to match historical trends as time goes on.

But the New York Daily News does things differently. That’s why they are called “FAKE NEWS.”