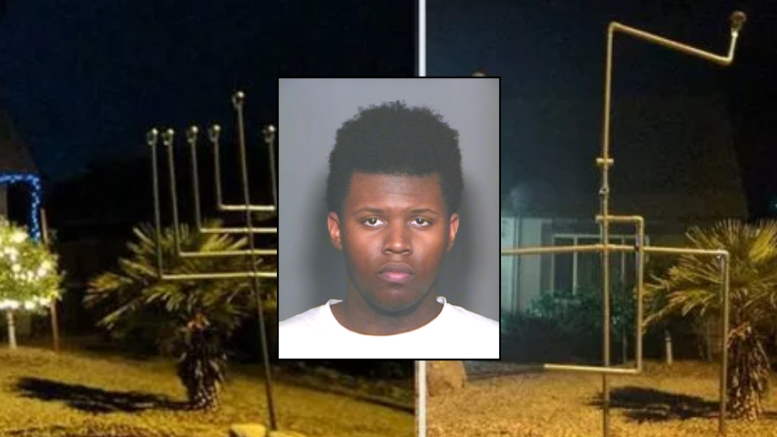 Another “Donald Trump inspired hate crime” claim has been busted.

On December, 30th, 2016, a menorah in Chandler, Arizona was vandalized. A large pvc menorah was constructed in the front yard of a family home. Vandals re-arranged the menorah to look like a swastika. The story received national media attention. The narrative was that white, racist, Trump supporters were to blame.

The ADL, a far-left group,  blamed the incident on Donald Trump. ADL regional director Carlos Galindo-Elvira claimed that there had been an increase in anti-Jewish hate crimes since the election of Donald Trump. He claimed Trump had “let the genie out of the bottle,” with his “inviting language of hate.”

Now, two and a half months later, four people have been charged with aggravated vandalism and felony trespassing. One of the perps is Clive Jamar Wilson, a 19-year-old black male. The other three are juveniles and their names are being withheld. The Chandler police department has not disclosed the race the other three suspects.

Dozens of so-called “hate crimes,” that have been blamed on white Trump supporters, have turned out to be hoaxes.

The ADL also received a bomb threat at one of their offices recently. They blamed it on Donald Trump. Shortly after a black male, who is involved with the #BlackLivesMatter movement, was arrested.

The ADL has yet to apologize for blaming either incident on Trump supporters.