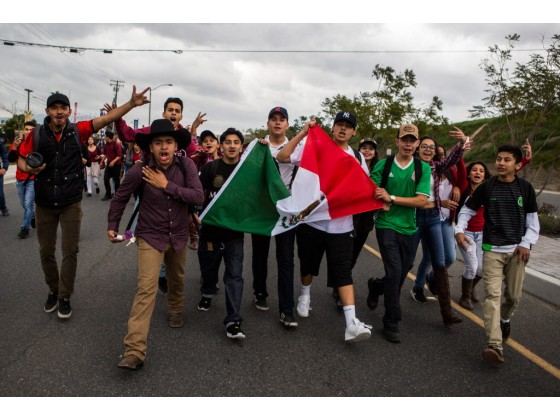 Rubidoux High School, in Jarupa, CA, is 92% Latino. Dozens of students skipped school on Thursday as part of a nationwide protest called “A Day Without Immigrants.” The protest was organized by radical leftists and illegal alien advocates. Many of the missing students converged at a designated location to wave Mexican flags and chant racial slogans. They chanted “viva la raza,”which means “long live the race.”

Now they are being persecuted for noticing this. The school has placed them on paid leave while their political views are examined. A local far-left newspaper, called The Press Enterprise, wrote an attack piece on the teachers. This prompted many of the same students to stage a “walk out” on Friday. During the walkout they protested the American flag flying in front of the school and also chanted “[email protected] Donald Trump.”

Science teacher Geoffrey Greer started the thread Thursday afternoon by saying the nationwide strike only proved “how much better things might be without all this overcrowding.”

“That’s what you get when you jump on some sort of bandwagon cause as an excuse to be lazy and/or get drunk,” Mr. Greer wrote. “Best school day ever.”

Art teacher Robin Riggle responded by saying the 50 absences in her classes made it “a very pleasant day.”

Guidance counselor Patricia Crawford declared “more, please” after stating that the cafeteria was much cleaner after lunch and that there were less disciplinary issues than on a normal school day.

To protest comments by their white teachers, a large group of Latino students held a “walk out” on Friday. At one point they stood around the flagpole and chanted “change our flag.” Presumably they want it changed to the Mexican flag.