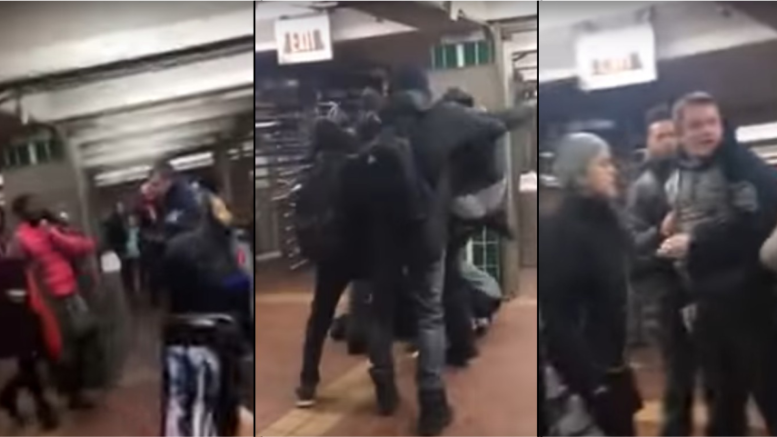 Update: Police just released a collection of photos of the perpetrators.

There was another mob attack caught on camera in Philadelphia. It occurred on March 16th inside a SEPTA subway station. A large group of young black males can be seen knocking down a victim and then brutally stomping on him. FOX 29 blurred the face of the victim so you can’t see what race he is.

However, an unedited version of the cellphone video has been placed on youtube. You can clearly identify the victim as a young white male. The victim is assaulted. He tries to defend himself and the crowd rushes forward and knocks him down. Then they kick and stomp on him. Eventually the attackers run away and a group of pedestrians pull the victim to his feet.

You can also see another unidentifiable victim on the ground being pummeled nearby. There is also a white female who appears to be screaming and reaching for her purse as a large male snatches it.

A spokesman for Philadelphia law enforcement says mob violence is becoming a daily occurrence. FOX 29 said the attack “was not isolated.”

Philadelphia has seen a rash of large-scale mob violence, committed by young black males and females, in recent weeks. On March 6th, over one hundred black teenagers rioted and attacked people in the City Center district of Philadelphia. On February 17th, an event called “Black Resistance March” ending in rioting and fighting with police.