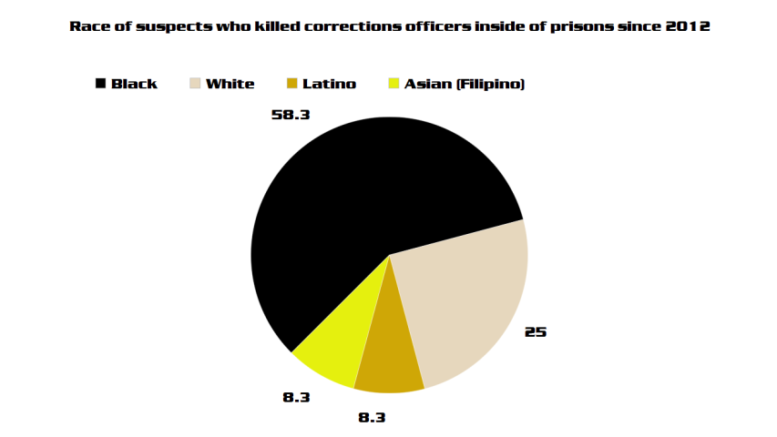 This study was conducted by Narrative-Collapse.com to compliment our study on race and police killings in 2016. Only a small number of corrections officers are killed each year. If we go back to 2012, we have twelve killings. To be very specific, we only counted corrections officers, killed by inmates, while at their job. During this time period there were two corrections officials that were killed during home invasions. Both perps were ex-cons. In one case it was suspected that a white perp specifically targeted the victim. In the other case it is believed that a black perp did not know that their victim was a corrections official.

There were spikes in 2012 and 2016, with four corrections officers murdered by inmates in both years. All twelve corrections officers were killed by male inmates. Five of the victims were women. Three of the victims were black, and the other nine are white. Seven perps were black, three were white, and one was Latino. One perp is Filipino. which creates an anomaly. Unlike some major media outlets, we do not want to take an anomaly and sensationalize it as a “trend” or “pattern.” If the sample size was expanded to include more years, the percentage of Filipino offenders would probably shrink dramatically as the data grows.

The results should not be considered scientific because there are not very many total killings each year. We stopped at 2012, because the further back you go, the harder it is to find out who the perpetrator was. This data is just to compliment our other study.